On the occasion of the Doctor’s day, the RC Madras Central Team honored a few Doctors’ for their service thro’ Rotary at RC MSH and RC VHS TTK BB.

This was our first event for this Rotary Year 19-20 under the Presidentship of Rtn. Sanjay Dhurka. President Rtn Sanjay Dhurka opened the proceedings in both RC MSH & RC VHS and formally welcomed the gatherings with a warm message of goodwill.

The Vocational Service team under the Directorship of Rtn Ram Srinivasan & MSH Chairman Rtn Gopinath coordinated the programme and recognised the following Doctors with a Certificate of Recognition.

Dr Tamilvanan – He has been with us for last 30 plus years and practices in Rotary Naganallur Sidney Hospital
Dr Raghu – also with us since 30 years and has been doing free camps every week last 26 years
Dr Chakraborthy – DGM Air india and practices in our hospital last 10 years and conducts many medical camps free.
Dr Sampath , our CMO , was also felicitated.

Dr P Srinivasan – JEEVAN Stem Cell – we have tied up with Jeevan thro an MOU for creating awareness of Stem Cell Donors and increasing the registary.

Dr.Varadarajan of Blood bank was recognised with a shawl.

The Event was attended by many of our Senior Rotarians. A tour of the premises was made for some of the Senior Rotarians who were visiting after a long time. PDG Rtn SvRm Ramanathan gave an inspiring talk on how Doctors have played a key role in his life. PDG Rtn SvRm thanked the Doctors for their help to society.

PP Rtn K Narayanaswamy was very impressed and moved with the progress and developments in RC MSH since his time as President on 1990-91. Rtn KN announced a spontaneous contribution to the MSH.
Rtn G Rajagopalan recollected the hospital during his days as Director – Community Health and also was quoting staff from Nanganallur who were appreciative of the RC MSH. Rtn GR also announced a spontaneous contribution towards dialysis.

Rtn Vinod Saraogi summarized the whole proceedings and thanked the Doctors for their valuable assistance.

Rtn Ram Srinivasan proposed the vote of thanks in both locations.

The Certificate of Recognition was given by our Club Rotarians –

The staff of RC MSH and RC VHS BB also attended the programme. 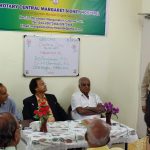 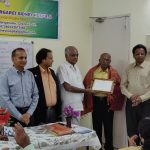 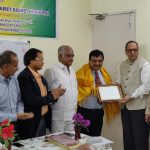 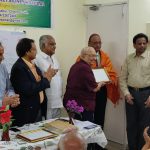 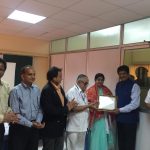 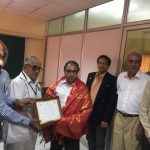 This entry was posted in Uncategorized. Bookmark the permalink.
Rotary Club of Madras Central